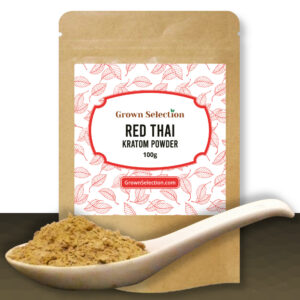 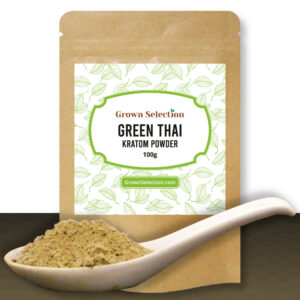 The use of this tropical plant’s leaves was banned in Thailand because of the Kratom Act of 1943. It’s no surprise, since the country punishes people for having small amounts of cannabis by up to a year in prison. Mitrogyna speciosa still grows in Thailand, because of its perfect tropical climate and growing conditions. However, harvesting the leaves is illegal. As a result, nobody actually sources this strain from Thailand. Instead, Red Thai kratom powder is sourced from Indonesia. Ours is sourced from small family farms and sterilize it to remove microbials and other contaminants.

Red Thai kratom powder is produced by grinding the mature, red-veined leaves of this plant into an ultra-fine powder, before pasteurizing it. It is an extremely popular strain, and all-natural. This high-quality red-veined strain is high in alkaloids and its users swear by it. They often compare it to Red Bali kratom, as its mitragynine levels are in the average range.

People have chewed the leaves of this plant for centuries, and dried them to brew as tea. Now, it’s available as a powder for educational purposes. Users report it as being one of the more relaxing strains. They say it works as a mood booster, though it is not as stimulating as other strains.

Note: If you want to resell our Red Thai kratom, we also sell Bulk Red Thai Kratom Powder in quantities up to 10kg at a discount.

Any cookies that may not be particularly necessary for the website to function and is used specifically to collect user personal data via analytics, ads, other embedded contents are termed as non-necessary cookies. It is mandatory to procure user consent prior to running these cookies on your website.